When Going Out Was Special

There was this special time when “going out to eat” was something you did in frequently. It was a time when a family would treat themselves to something out of the routine and give “mom” a night off. 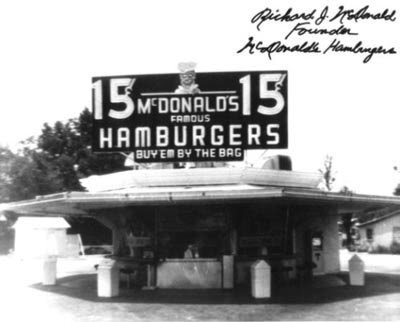 Family outings to restaurants were indeed unique. White table cloths, the waitress with water for all, the crackers in the basket on the table and a list of standard American fare that would come from the swinging doors in the back. You could predict the menu regardless of where you went.

Ah but then there was that special time when you and your parents would venture to a “fast food” emporium. Places that would offer a drive-up area where waiters would arrive at the driver’s window to get your order. A&W Root Beer. Dairy Queens.

But the most special…..when I was a kid was to go to McDonald’s and get a 15 cent hamburger, small fry and a shake.  There wasn’t much more on the menu those days, and if you wanted to eat there you would bring the bag back to the car. The window was out doors and they would hand it though the window — with a cardboard tray if there were several drinks. Not pressed board or Styrofoam, but standard cardboard. They had millions sold back then I think- not billions. 🙂

What is your special restaurant when you were young?

Posted in Before and After Things Change and tagged being remembered, Comfort food, Fast food, Food, going out to eat, Memories, moments, Recalling the past, restaurants, Slow Down

One thought on “When Going Out Was Special”