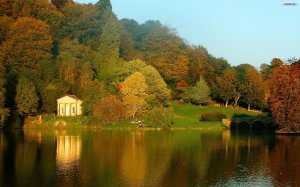 It was the first days of autumn. I can still smell the mix of oil and gasoline from my dad’s Evenrude small engine.  We carefully slipped into the aluminum boat and shuffled our tackle to the middle. With a couple of pulls of the cord the engine stuttered on and we were off.

There was a light mist on the lake, In the early morning there wasn’t a lot of wind for a fall day. The lake was more like a mirror and the trees surrounding them had begun to turn colors, bright orange and reds and burnt browns. The color of the trees extended onto the small lake like dashes of fire as the sun came up in the east. The small motor didn’t disturb the water much, but moved our small flat-backed canoe forward slowly across the small lake with an echo.

Headed for a small bay off the shore of a marshy area things were optimistic for a catch. My dad would say that there was a special place- off the shore where fish would congregate. I always thought that kind of funny because I had thought of fish in schools, but his term made it sound like they were lined up for Sunday church. Where the small fish were the bigger fish were bound to be nearby feeding on the minnows. The large mouthed fish we were after were not quick to hit the bait, but when they did they would pull hard.

As we settled into the marshy inlet we heard some splashes of wild life on the shore. A muskrat perhaps, or a raccoon hiding behind the tall cat-tailed marsh grass. Some swirls in the water proved that there was opportunity under the water for a morning of success and surprise.

It was a very special time. No matter what the catch. Special because we had shared our bacon and egg breakfast in the first light of dawn, we had dressed for the chill of morning knowing that as the sun rose the temperature would rise with it. The early day would give way to blue sky and a beautiful fall day – what we called Indian summer.

I cherish those days even now . I wish I had spent more of those kind of days with my kids. They were special then and decades later they are still there – in my recollections of a time that will ever be imprinted on the  memory of my childhood.

I had some great times with my kids over the years and I hope they will remember them for the many years to come. My advice to you – to my kids. Embrace the memories, be conscious that they are there and soak them in.  They’re worth more than most any riches you can accumulate in your life.

Posted in Learning Lessons Along the Journey Of Life and tagged being remembered, cherish, Faith, Family, Happiness, life is precious, Memories, moments, Sprituality, tracks in the dust